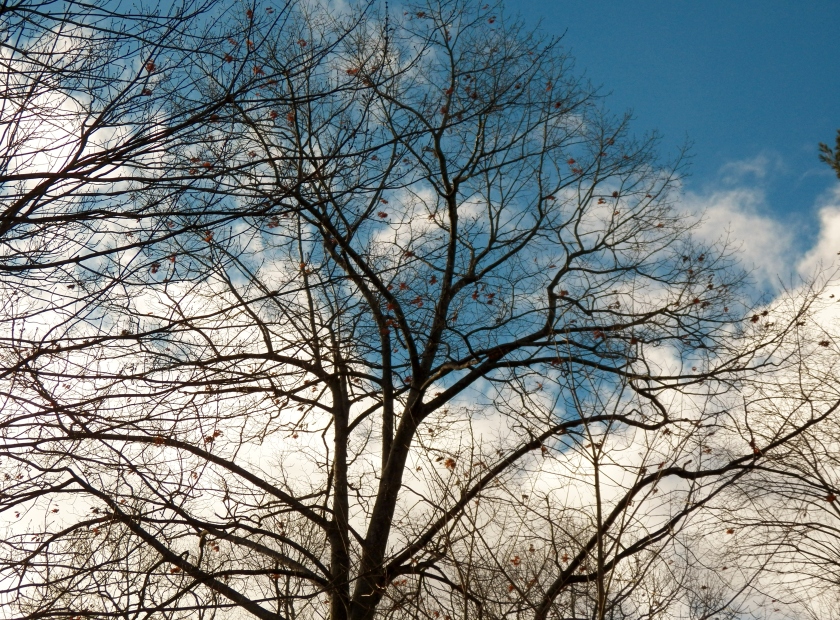 I have been watching this tree, which stands a few yards from the edge of my property. It is the only deciduous tree around that still has some leaves clinging to it. Why, in the midst of Winter, are these leaves stubbornly holding on?

Today, January 11, is the commemoration of Alice Paul’s birthday. Alice was a leader in the Suffragette Movement in America, and was one of the most determined fighters for Equal Rights. She continued her work long after the 19th Amendment was ratified, and worked tirelessly for the Equal Rights Amendment, which she lived to see enacted. She died in 1977, five years after it became law.

Alice was one of a group of immensely dedicated people who fought for Women’s Rights in the early part of the twentieth century. It is hard to believe, but my own Grandmothers were among those not allowed to vote until 1920. Those of us who have grown up feeling entitled to vote cannot, perhaps, fully imagine or appreciate what it would have been like to have had no voice in our democracy. Yet, less than 100 years ago, men decided what laws would be in effect for the populace, and who would implement the laws.

Alice Paul’s family had a farm. She grew up with Quaker values, and farm work ethics. Her Mother said to her “When you put your hand to the plow, you can’t put it down until you get to the end of the row”. Alice later quoted this as a metaphor for her unwavering commitment to her principles. She never put down the plow. She, like many of the women of the Movement, gave everything to the cause of Equal Rights. Thanks to her, women like me and my friends can enjoy the freedoms we take for granted.

What makes some people heroines or heroes? What is that genetic mixture that brings such remarkable fortitude and strength of purpose to some humans? Why don’t they give up when being beaten and humiliated? Why do they hang on? What kind of rootedness do they possess?

I don’t know the answers to these questions, and I am always fascinated by the power and resilience of the Human Spirit in the face of such adversity. To possess such courage and have such a fervor for one’s convictions is, to me, such an admirable quality. I guess that’s why I continue to stare at those leaves. Like all my heroes and heroines, they just keep hanging on.